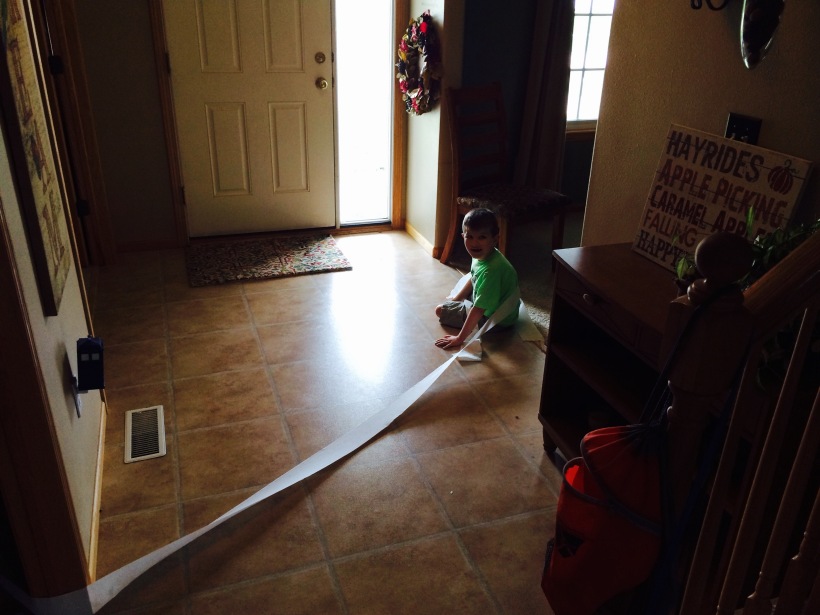 This picture is a couple of years old now.  I like it because it reminds me of a time when I thought that Koan getting into toliet paper was cute.  As I’ve shared here many times before, his obsession with bathrooms is no longer photo-worthy, cute, or appreciated.  But, that’s a type of progress, and I’m thankful for that.  In this photo, you can see a little of our home’s layout and thus glimpse some of Koan’s routines.  Just to the left of the front door is Koan’s room.  The doorway with the toilet paper coming out of it is our half bathroom.  Each morning when Koan gets up, he’s set on the floor by his bed.  He then scoots out into the entryway and (eventually) into our great room and kitchen.  I say eventually because on this trip he makes a point, each time, to stop and see if the bathroom door is shut.  If not, the fun begins.  It’s a huge bonus for him if someone has also left the toilet seat up.  The fun (and mess) really ensues then.  And, it’s not unheard of that he will sometimes will get a bath (among his most favorite activities) if there’s enough of a mess.  So, there’s incentive for him to go big!

Just beyond the half bath door, to the left is the doorway to the master bedroom and nested inside there is the master bathroom.  This is can be the Holy Grail for Koan.  There needs to be a confluence of events for this to work out for him.  But, it happens more times than it should.  First, the master bedroom door must be left open.  Then the master bathroom door must be ajar.  Finally, the toilet seat needs to be up.  When this all comes together, it’s big-time fun!  Because the master bath is so far away from the great room and kitchen, we can’t hear him.  So, he can be in there enjoying himself for quite a while.  Usually, he’s found out when someone realizes it’s too quiet.  Then the investigation starts.  Usually, there are groans and rolling of eyes when one of us realizes that someone left all the doors open.  But, again, this level of independent (and albeit naughty) play is a sign of real progress.

So, again, the picture captures a time when we were just happy that Koan was mobile.  I’m excited by what will be next in his progression.  But, like most things with Koan, the growth is rarely linear.  Last year, he met and even exceeded his IEP goals for mobility.   However, he’s regressed this year a bit.   In the previous school year, he used a “Crocodile” walker.  This is a device that only had supports for his forearms.  This year, he refused to use it and had to go back to the older walker model that gave him hip support with belts and straps.  As I’ve said before, the team that works with him at Prairie Ridge is so great!  His teacher, Stacy, worked with the physical therapist from the AEA and developed a theory that Koan was not as interested in walking because one of his legs was slightly longer than the other.  We confirmed this in a recent trip to the University of Iowa Children’s Hospital.  However, the difference in leg length was due to the fact that the tendons in his left foot/ankle were a little tighter than the right.  So, when looking at him and even functionally for walking, this was making his right leg longer.

Stacy and Colleen, the AEA PT, contacted (with our approval) Tucker, the wonderful prosthetic specialist from Hanger Prosthetics.  Koan’s shoes are made especially for his leg braces (AFOs).  So, they need to be carefully measured and special ordered.  Jeri was thrilled with the last pair we’ve received because the shoes look a lot more like something a little boy might actually wear and not institutional garb.  Tucker was really excited to show them to her when we got the last set.  I liked them because they are Hawkeye black and gold.  But, these shoes are medically necessary and quite expensive.  So, this is also another great example of how the public, fee for service Iowa Medicaid model works so well.  We never have to hassle with the approval process.  Our insurance covers some of the cost and HIPP/Iowa Medicaid picks up the rest.  This is a great deal for us and for Iowa taxpayers.

So, far the reports have been largely positive regarding Koan’s mobility with the new shoes.  I don’t think he’s been back in the Crocodile yet.  He has a few months of bad habits to unlearn.  But, it sounds like he is really making strides (pun intended).  Hopefully, he can get back to where he was last spring before the end of this school year.  It takes so many systems and caring people to keep him moving forward.  I feel so blessed that he is surrounded by such great people.