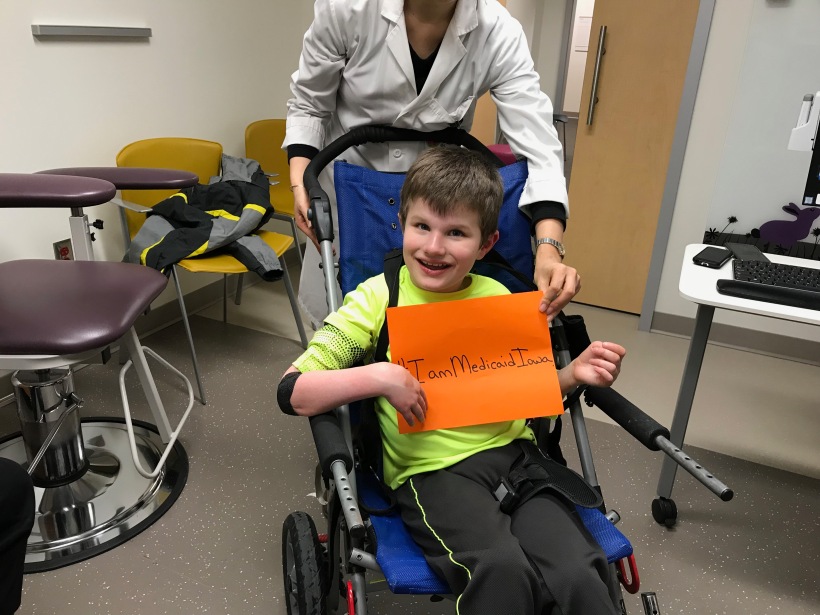 A few weeks ago, I wrote that we had asked for approval from our insurance provider to do some additional genetic testing on Koan to see if they could pinpoint the cause of his disability.  The good news is that we have been approved for more testing.  We got approval on a Friday and I took Koan down to the University of Iowa Children’s Hospital on the following Monday to do the blood draw.  I wasn’t sure what time the lab closed at the hospital, so I figured it would be best to get him down there before 4:00 PM.  I was assured that we would not need an appointment to do the draw.  Here’s the story of that day.  There’s nothing earth-shattering here.  There are some cute moments and the rest is just day to day “life with Koan” anecdotes.

I arranged to pick Koan up early from school that day — around 3:15.  It takes about 30 minutes to get to the hospital from the Prairie campus.  Koan’s school day normally finishes around 3:45 PM. He was in the office waiting for me when I arrived.  It was great — when he saw me come in the office he flipped out.  There was an ear-splitting screech of joy and a great deal of happy-dancing in his Convaid.  He nearly jumped out of it.  There was so much commotion that the building principal stuck her head out of her office to see what was happening and to make a joke.  Stacy Pasker, Koan’s teacher, told me later that she heard him, too, and knew that I had arrived.  It’s pretty fun to get that kind of greeting.

I packed him into the car and folded the Convaid into the trunk.  As we exited the Prairie campus, I turned right coming out of the roundabout on Kirkwood and headed south.  Koan was already having a full-blown dance party in the back seat of the Civic (shaking the whole car).  As I did this, he took it to a new level because he knew we were not heading home.  Like his old man, Koan loves to go to Iowa City.  So, as we got on the ramp to  380 south, became even more excited.  I actually thought he might pass out or hyperventilate.

By the time we got to UICH, he had calmed down a bit.  I navigated the Civic through the underground parking ramp and found a handicapped spot a couple of levels down.  I then got the Convaid out to the trunk and set it up.  It’s always a bit of wrestling match getting Koan out of the Civic. It’s much easier to move him in and out of the van.  Not only is he tall and rather heavy now, he thinks it’s great fun to swipe the glasses off of my face while I’m using both hands to reach down and wrangle him out of the backseat.  This can be a chess match.  I try to find ways to pin one (or if possible) both of his arms so he can’t get to my face.  This particular time, I was able to restrain the left arm (his most dangerous weapon), but he cleverly used his right to swing across and connect with my nose.  To both of our disappointment — I was unhappy he hit me and he wanted to see the eyewear go sailing — my glasses were merely displaced (pushed to far right of my face and precariously dangling from my nose).   I also grabbed the #IamMedicaidIowa sign I had made.  I wanted a picture of Koan in UICH to share.  The #IamMedicaidIowa was a media campaign organized by Disabilities Right Iowa.  I would encourage everyone who cares about Koan to participate.  It’s super-simple.  Just take a picture with a homemade sign.  You don’t need to be disabled or a caregiver.  DRI has even provided all the text you can use to share.

I dropped him in the Convaid.  Straightened my glasses and strapped him down.  As always, I started with his feet (so I don’t get accidentally kicked) and moved up to his belt and arms.  We then wheeled to the elevator to get into the hospital.  When we arrived on at the lab doorway on the second floor, a friendly lab tech motioned us to come inside.  I explained that we didn’t have an appointment, but that genetic counseling had requested a blood draw.  He looked us up in the workstation and found the order.  I started unbuckling Koan from his shoulder straps.  I would need to take off his coat so the tech could draw blood from his arm — at the crook of his elbow.  Koan was still pretty amped up from our trip, so it was clear that we were going to need more help if the tech was going to be successful in drawing blood.  So, I let him know that and he called into a back room for some help.

Like most of us, Koan does not love needle punctures.  In the past, when he’s gotten a significant shot of medication he has given me (and Jeri if she’s there) a monumental look of betrayal when the stick happens.  Then there are tears and howls of outrage.  So, I was a little worried how this would go.  The two young ladies, med students I’m guessing, came in from the back of the lab to assist the tech.  That was perfect!  Koan loves the ladies — and for the most part — he’s popular with them, too.  He immediately starts flirting with them, coyly smiling, giggling, raising his eyebrows, etc…  Each one of them took arm to hold.  They also reciprocated the flirting — telling him how cute and handsome he is, etc…   This worked like a charm.  The needle went in, but Koan was so busy with the two students that he didn’t even realize he’d been poked.

After taking out several vials of blood, the tech removes the needle and bandaged him up. Koan was still having fun with the two lab assistants.  At that point, I asked one of the techs to hold up the #IamMedicaidIowa sign in front of Koan so I could snap a picture.  Fortunately, one of them agreed to help.  I then put Koan’s coat back on and buckled him fully into the Convaid for the trip back to the Civic.

When we arrived back at the car, I saw that in my haste to get Koan secured in his Convaid and up to the lab that I had left the back door open.  So, the whole time we were up in the lab, the back door of my car was wide open.  Luckily, nothing was taken.  We repeated our chess match while putting him into the car.  That time around, I fully won with no blows landed to my face.  Koan was pretty worn out from all the excitement and that made the trip home a bit easier and less dramatic.

I don’t know how long we’ll need to wait for results from this test.  I would imagine it will be several weeks before they will get back to us.  I’ll share information here when we do get it.  I will be pretty surprised if he doesn’t come back with at least some Angelman markers in his results.  But, who knows… Koan has a long history of being unexpected.