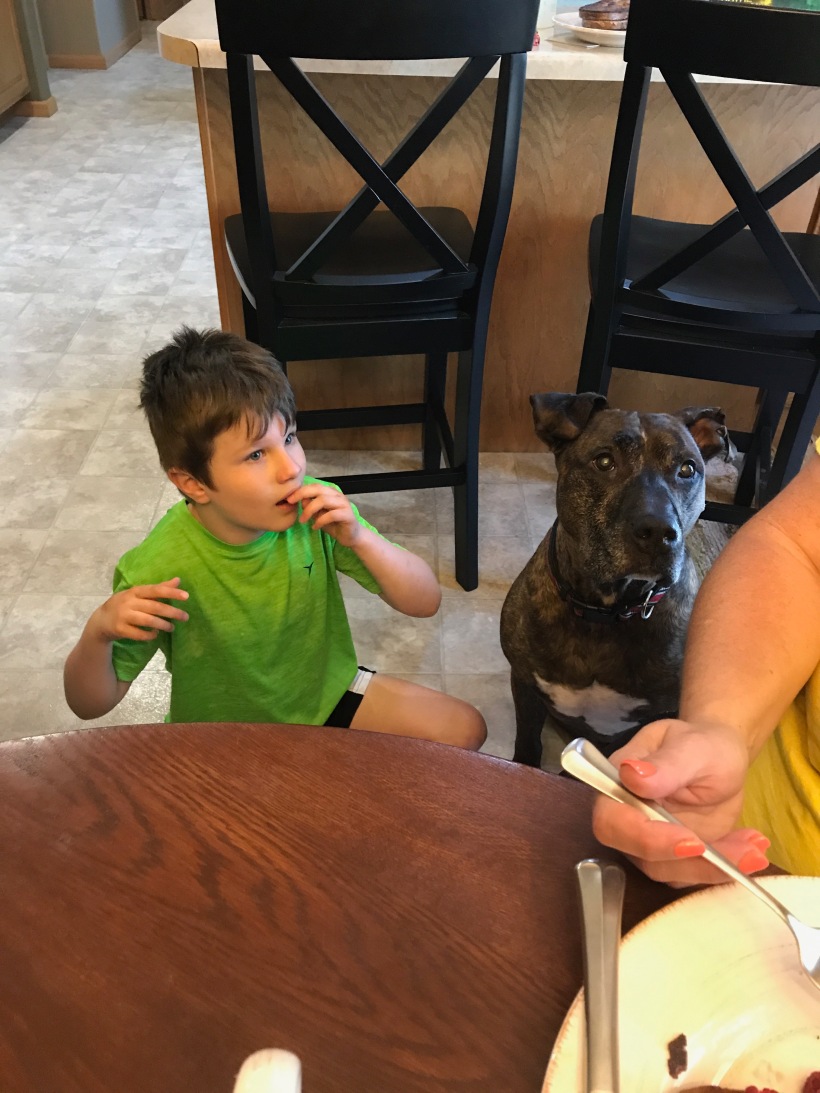 So, I have to admit that I’m procrastinating writing Koan’s Story Part 3.  That part of the story will be about our time the NICU — some pretty dark days.  Before I get to that, I was thinking a bit about our trip to South Dakota last weekend.  As I may have mentioned before, Koan LOVES to go places in car/van.  Putting him in the car or van is now a kind of dangerous event for everyone as he does his big, full, happy dance (swinging arms, legs, head, etc…).  And at 70ish pounds, he is a real handful.  Koan has always loved car rides.  But, when he was younger there was an expiration time for his joy.  We were never sure when it would be one hour, two…  He would be really happy, and then very not happy.  It was pretty brutal having him meltdown in his seat and still be an hour away from home.  So, for the last three or four years, we’ve not taken him on any trips that are longer than an hour or so.

However, this spring we started testing the waters again on longer trips.  To our delight (and Koan’s, too) we found that he was tolerating longer amounts of time in the car much better.  We did some scaffolded day trips — starting at an hour and going up to three — and he did really well.  So, we decided to take him with us to visit our friends, the Derrs, in Sioux Falls, SD — about a five-hour drive.  The van ride went great.  No meltdowns or unhappiness there and back.  It was a great trip!

While we only stayed for a day, we did a lot of fun things — when to parks, went out for ice cream, and ate meals together.  And, for the vast majority of the time away, Koan enjoyed himself.  One moment, in particular, stood out to me.  Saturday evening, we had a later meal.  Koan had already had his supper and he was scooting around the Derrs’ house.  As you can see in the picture at the top of this post, the Derrs have a dog, Lucas.  Koan has trouble recognizing non-human faces most of the time.  Here’s a quick story to illustrate this point.  A couple of years ago around Easter, Jeri, Koan, and I were at Hy Vee getting groceries.  We were in the frozen food section when a person in an Easter Bunny costume came skipping down the aisle.  There was a high school-aged girl right behind the Bunny carrying a basket of candy.  The Bunny was waving and flirting with everyone in the aisle, particularly children.  It was clear from her expression that the high school girl would have rather been anywhere else but there.  The Bunny approached our cart and put his face right down in front of Koan.  The girl was a step or two behind him to his right.  Koan reached out and shoved the Bunny’s face aside so he could get a better look at the girl.  Once she smiled at him, it was over for the Bunny — he did not exist in Koan’s world.  We joked with the guy in the Bunny suit, letting him know it was nothing personal — with Koan, it’s all about the ladies (which is true).  But, the fact is, Koan almost never recognizes anything but a human face as a person.  He’s never really interacted with our cats (occasionally, he’ll grab a tail…) and he’s not interested in stuffed animals.  I think this is largely because, like very young children (say a six-month-old), he’s fixated on and loves human faces.  He’s not really learned how to anthropomorphize — put a face on anything that’s not human.  And, therefore, recognize it as a living thing.  This is the sort quandary that drives the psychologists that evaluate him nuts.  He moves around on his own, understands spoken language, and uses some signs, but that part of his aspect presents like a 6-month-old.  So, it’s hard to put a label on him.

Back to my original story… I missed the moment with my camera, but there were flickers of really interesting interaction between Koan and Lucas.  There were a couple of times when Koan was reaching for Lucas’ face, just like he would a human face.   It was pretty cool. This was another small victory.  But, that’s not really my point here — more precisely I’ve realized there’s an important nuance to recognizing small gains.  While it is really important to celebrate every small victory and achievement, it’s equally important not to be bogged down by all the small (and even large) disappointments.  I’m sure this seems really intuitive.  After all, it’s just converse logic.  But, the subtle understanding that I’ve parsed out of this idea is a larger appreciation for the importance of strength-based learning.  For the things that really matter — the stuff that’s complex and hard to define, but things of high value: concepts like independence, competence, or happiness — it’s far better to build on a strength than to coach up a weakness.  There are lots of different (and equally good) paths to independence, competence, and happiness.  There’s no one “right way’ to do achieve or to strive for these ideals.  What works well for one person, won’t work for someone else.   By giving Koan more opportunities to continue to be successful on his terms and scaffolding these opportunities (this takes some artful judgment) for rigor, I really believe we give him the best shot at growing skills and outcomes we find the most valuable.

For the things that really matter — the stuff that’s complex and hard to define, but things of high value: concepts like independence, competence, or happiness — it’s far better to build on a strength than to coach up a weakness.  There are lots of different (and equally good) paths to independence, competence, and happiness.  There’s no one “right way’ to do achieve or to strive for these ideals.  What works well for one person, won’t work for someone else.   By giving Koan more opportunities to continue to be successful on his terms and scaffolding these opportunities for rigor (this takes some artful judgment), I really believe we give him the best shot at growing skills and outcomes we find the most valuable.  I think we get so much further than hammering on him to improve his skills for things he can’t do well.

I’ll be completely transparent and honest at this point.  I find this really, really hard to do for a couple of reasons.  The question I’m asking myself now is how do I effectively and with appropriate repetition scaffold this new thing Koan is doing with faces?  Do we play more with stuff animals or puppets — something else?  As I said earlier, it’s hard to find the right balance in how much or how little to scaffold the play.  But, there’s an even bigger, harder question:  where do I find the energy and discipline to do this at the cusp of a new school year?  Sydney is moving to Cedar Falls to start at UNI in three weeks.   After just getting his license, Tiber now needs a car.  There’s always a lot going on in our lives.  The difficult reality is that playing differently with Koan is a very small thing.  But, it is so easy to forget, fall back into burned in routines.  That’ just the way life works sometimes.  I suspect this is true for many other caregivers out there.  I guess all any of us can do is understand our own strengths and limits and then do the best we can.